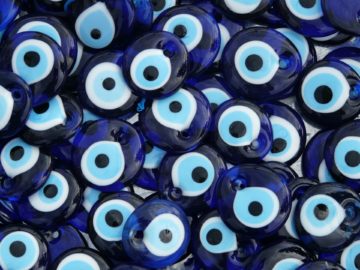 The evil eye is engrained in human history for as long as anyone can remember. It can be found in earrings, necklaces, textiles, and even door knockers. They come in all kinds of colours and sizes, looking as traditional as a series of circles painted on glass to as realistic as an actual eye. With it being so prominent it’s interesting to find out the meaning behind the symbol.

First and foremost, the curse and protection are two different things. The creation of the curse itself is hard to pinpoint, but we do have an idea of when the Nazar (eye) began to surface.

While commonly associated with ancient Greek and Roman cultures, it’s said to be found in ancient Mesopotamian Cuneiform 5,000 years ago. Even then, many argue there are signs of it as early as the Upper Paleolithic age. Religions like Judaism, Christianity, and Islam all have mentions of it in their sacred texts at some point or another. It’s so ingrained in human culture that the Nazar is one of the most popular tourist souvenirs – home decor not excluded. That said, while it’s very widespread, only 36% of cultures believe in it according to a study by John Roberts.

Despite the differences between these cultures and the names used, the general name and meaning stay the same. The most common depiction is a blue eye on a blue surface which symbolises water or heaven. Generally speaking, the Nazar is meant to protect whoever wears it from falling prey to malicious glares (in most cases, unknowingly). These looks can cause all kinds of negitive energy on the victim including physical harm, bad luck, and other means of misfortune.

It’s said that there are three types of evil eye curses: the unconscious eye which unintentionally harms people,  the intentional stare from envy or jealousy, and the hidden eye, which is believed to be the most dangerous. All of these can be warded off with different charms.

A common version of the eye is the nazar. As mentioned before, the Turkish variation comes in a wide array of forms. While most commonly blue to represent Heaven, they can also be found in green. Of course, these days the eye comes in just about every colour of the rainbow, and then some. Another common form of protection is the hand with the eye in the centre, called a Hasma and sometimes have prayers carved into them. Other countries may use red rope, eye-shaped foods, and the Fig Hand symbol common in metal music.

Symptoms of curses consist of fairly common things: everything from mild illness to death, family and financial problems, even something as small as a wart. What’s interesting is that humans aren’t the only ones suseptible to the curse. Animals can also get sick, plants can wither and become weak. Even inanimate objects can be cursed.  Buildings can develop leaky roofs or become infested with bugs. There’s no limit to what the evil eye curse could do, making it one of the most feared folklore.

Once someone has had a diagnosis has been done, the curse needs to be cured. Many turned to charms, potions, and spells while others sought out doctors, shamans, and psychics. Just as many other popular folklores, the best prevention and cure is garlic. Eating garlic is said to be one of the best methods, and even saying the word out loud could cure the symptoms.